According to legend, a "white witch" called "Annie Palmer" who murdered three husbands haunts the property. An investigation of the legend in 2007 concluded that the story was fictionalized. 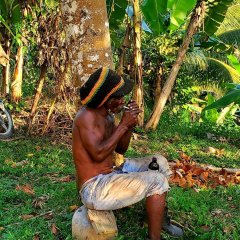 RoseHall is widely regarded to be a visually impressive house and the most famous in Jamaica. It is a mansion in Jamaican Georgian style with a stone base and a plastered upper storey, high on the hillside, with a panorama view over the coast. The architect James Hakewill visited the building and wrote:
It is placed at a delightful elevation, and commands a very extensive sea view. Its general appearance has much of the character of a handsome Italian villa. A double flight of stone steps leads to an open portico, giving access to the entrance hall; on the left of which is the eating-room, and on the right the drawing-room, behind which are other apartments for domestic uses. The right wing, fitted up with great elegance, and enriched with painting and gilding, was the private apartment of the late Mrs. Palmer, and the left wing is occupied as servants’ apartments and offices. The principal staircase, in the body of the house, is a specimen of joinery in mahogany and other costly woods seldom excelled, and leads to a suite of chambers in the upper story The land, 290 acres of caneland, was bought by Henry Fanning for £3,000 in 1742. It was previously called "True Friendship" and had belonged to Richard Lawrence. Henry married Rosa Kelly on July 16th, 1746, but died soon afterwards. His widow inherited the estate and married George Ash, a local plantation owner who realised Fanning's plan to build Rose Hall. It cost £30,000 to build and was lavishly decorated with carved mahogany and stone. However Ash died in 1752. Rosa married for a third time, to Norwood Witter in May 1753, who lived until 20 May, 1765, managing to consume a significant amount of her fortune. In May 1767 she married John Palmer, a widower who owned the adjoining plantation, "Palmyra".

Rose Hall estate had about 650 acres divided among sugar cane, grass, and pasture for over 270 head of cattle. About 250 enslaved Africans were housed on Palmyra estate, which comprised about 1,250 acres.

The Spanish River In Chepstow, Portland, Jamaica | Must Visit