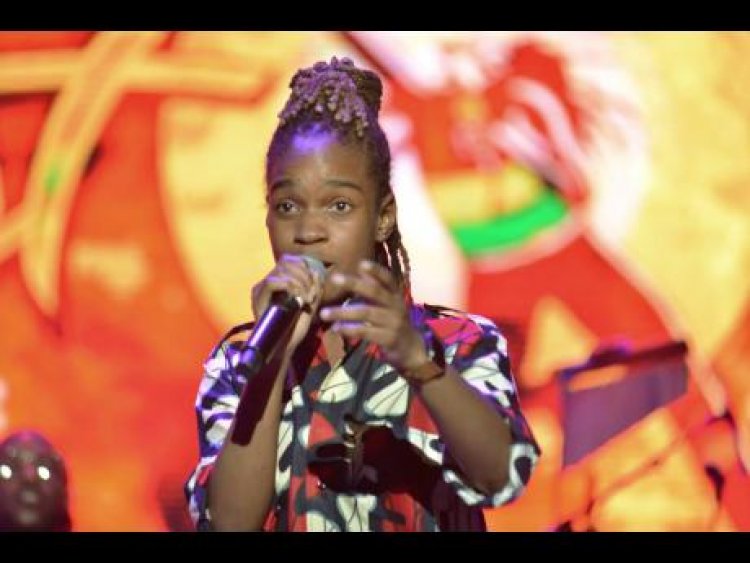 The Spanish Town, St. Catherine native was given nothing short of a dramatic prelude from her backing band which compromised Keneil Delisser on drums, Ottmar Campbell on keyboards, Kawain Williamson on bass, and Nicholas Groskopf on guitar.

Clad in a yellow and white cap, with yellow shorts, a white top, and matching white sneakers, Koffee, 22, began her set with the single Rapture, alongside backup singers and dancers. In true fashion, she remained calm and collected as she rendered the lyrics to the 2019 hit which was the title track of her Grammy-winning 2020 EP of the same name.

Members of the predominantly Caucasian audience could be seen nodding and rocking as she completed the entire track, which was topped off by an instrumental from the band.  “Thank you so much, everybody!” she uttered, to which she received faint screams of “Love you!” from the audience.

She immediately segued into one of her newest songs, Gifted—the title track from her recently released debut album of the same name.

Perhaps the calm composure of the patrons was a bit puzzling to the Jamaican singer, because she paused her set to ask, “Guys, how many of you here actually know who I am?”

Koffee received a unanimous cheer before extending gratitude to her supporters and apologizing for her tardiness.  “Thank you so much for coming out. I’m so sorry for being late; thank you for your patience,” she said.

“Can I ask you two more things?” she continued. “How many of you are seeing me for the first time?” to which she received another loud cheer and hundreds of hands raised.

“And, how many of you know I have a recently released debut album?”
That too got a favorable response.

“Thank you so much for supporting. It’s a pleasure to perform here for the very first time, and, I feel really happy to see all these beautiful faces coming out here to support myself and my band all the way from Jamaica. So, thank you so much.”

Koffee then transitioned into more new music by spitting the lyrics to x10.

She then announced that Run Away was dedicated to “all the lovers/couples” in the audience. As she sang, a lone Jamaican flag was raised by a fan to show support.
The entertainer also performed her 2020 smash hit Lockdown, and of course Toast—the song which gave her her big break.
Koffee had been set to make her debut on the festival’s 2020 line-up with now-embattled rapper Travis Scott as the headliner.  However, the festival had been on hiatus since its 2019 staging.  Other acts that hit the stage on Saturday (Day 2) included fellow Jamaican Masego, Megan Thee Stallion, and Flume.

Koffee will perform again at the festival on Saturday, April 23 as part of Weekend 2, which will run between April 22 and 24.

Teen Vendor, Landale Has A Bright Future As An Entrepreneur